Here we are. It’s September. Sunday services are now a week away.

After 60+ ‘no’s, we finally had our ‘yes.’ Welcomed as ‘people of peace,’ a bar positioned rather like a gateway to the city, opened its doors and welcomed us in.

It’s incredible that less than a year ago some of us had yet to even hear of the journey the Lord would shortly call us on. Now we’re putting our roots down in our very first Sunday venue.

Blessed with such an incredible group of organised, practical people, a rehearsal run was inevitable. We aim for the best. Having spent many years at Trent perfecting the ultimate chair curve, the optimum fill rate and the most perfectly brewed coffee, it would be amiss of us not to aim for the best once more. Not because we have the need to be ‘better,’ but because giving our best away is what we do. 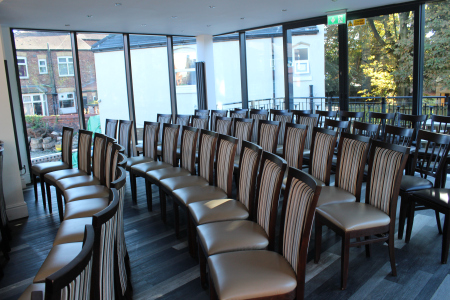 Simple things done well help not only bring newcomers into a welcoming and confusion-free space, but also releases team to spend as much time as they can connecting and building relationships.

With team members fighting viruses and fatigue, the energy nonetheless was incredible. Faced with two, fully laid restaurant rooms, we spent 3 to 4 hours positioning and re-positioning chairs, putting up speakers, creating safe and exciting kids’ rooms and welcoming hospitality areas. Once we were satisfied the following week would run smoothly, back it all went – chairs, tables, knives, folks and serviettes.

We have the venue. Now it’s time to ‘go out at once into the streets and lanes of the town and bring in the poor, the crippled, the blind, and the lame.’ (Luke 14:21)